Whether it’s for your brand-new Android, camera, or Nintendo Switch, you’re bound to need a boost to storage space sooner rather than later. While it’d be nice to have one of those just-announced 1TB microSD cards, those aren’t coming out until April—and even if you can find a retailer to buy one from (good luck with that, even 256/512GB microSD cards are hard to find), they’re priced at an even $450 (PHP 23,500). Yikes.

For us mere mortals with a more budget-conscious approach to satisfying our storage needs, these 32GB microSD cards from Samsung and SanDisk sit in sweet spot between capacity and cost; depending on which vendor you find yourself buying from, you can expect to pay between PHP 880–1,100 for one of these puppies. Much, much more palatable.

Today we have on deck the SanDisk Ultra microSD UHS-I and the Samsung Evo Plus microSD UHS-I. If your needs are fairly straightforward, you can’t go wrong with either of these. But assuming you have the luxury of choice, which one is better? That’s what this showdown is here to answer.

Taking a closer look at the products, it would seem that SanDisk’s advertised 98MB/s maximum read speed is definitively better than Samsung’s 95MB/s. Yet SanDisk doesn’t bother to include any estimated write speed on its packaging, while Samsung is confident enough to state 20MB/s for its write speed.

Both of these cards state they’re waterproof, temperature proof, and x-ray proof for good measure, with Samsung adding magnet proof to their feature set and SanDisk going the shock proof route.

Enough about what’s promised; let’s look at what’s delivered. We ran both cards through the Crystal Disk Mark 6.02 benchmark using an Anker AR200 USB 3.0 card reader, so bottlenecking on our system shouldn’t be an issue. Here are the results, along with a screencap of Windows 10’s drive properties for each to show off their actual capacities: 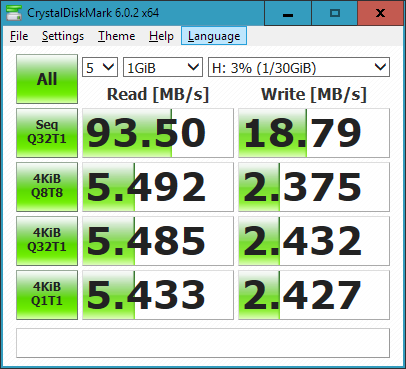 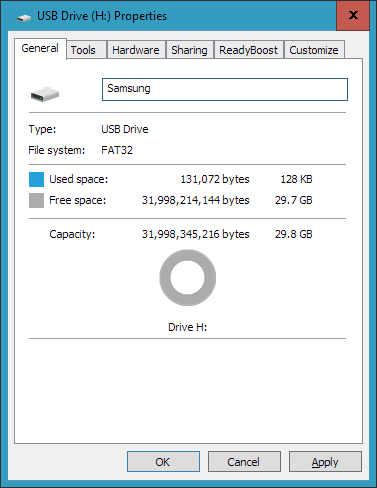 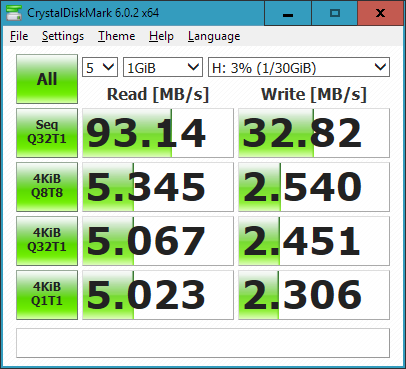 Right away, these benchmarks tell us that the differences between these cards isn’t as cut and dry as it might’ve initially seemed. While the scores for both sequential and random read speeds for each card are pretty neck and neck, sequential write speeds are a different story with Samsung’s microSD card capable of reaching 32.82MB/s against SanDisk’s 18.79MB/s.

That’s a 54% difference, and the benefits of a faster sequential write speed could be worth the slightly higher pricing Samsung tends to position itself at. Sequential writes are what you’d be concerned about if you’re looking to transfer fewer, larger files onto the SD card, or for recording video at higher bitrates. Why Samsung didn’t advertise its write speed at all on their packaging when it is measurably faster than their competition is a mystery, and a missed opportunity on their part.

This is the only real differentiator, however. Random writes and reads are almost exactly the same between the two, within margin of error. If you’re looking to use these as internal storage in an Android phone to install and run apps from, expect the Samsung and SanDisk to perform identically.

In summary, unless you’ve got clear and specific use cases for a microSD card, either the SanDisk Ultra 32GB or the Samsung Evo Plus 32GB will do fine. Samsung’s product tends to be a little more expensive while offering a 54% faster sequential write speed over SanDisk’s, which is a compelling reason in itself to opt for this brand. However, unless you know you’ll specifically be needing this, you may be more inclined to save a few bucks and get the SanDisk instead.